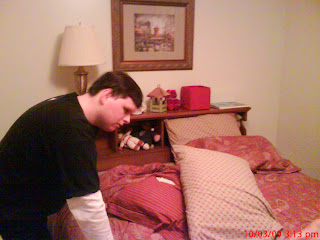 When you reach the difficult decision to place your son or daughter with a disability in a group home, it is good to know what services will actually be lost when they go in. Now, there is no problem most likely if the home provides good services while he or she is there, and keeps them there. But if there’s services you are used to getting at home and they don’t provide them at the group home, there is no way to get them aside from you paying for them, and if they are discharged from the group home, other services he or she used to get as a minor, in your home, may be lost, not to come back just because they are discharged.

Here is what has happened to us, so far.

I’m just posting this so that others ask all the questions they need, before placing their loved one in a group home. I’m not saying not to place them – Chris’s health has improved greatly after his year in the group home and he has been on a good routine — they helped him a lot. I just did not know he would lose his place on the lists with his placement, and am not totally sure I would have done it that way if I would have known.

Just another challenge in the walk we walk, as parents of children with challenges.

2010 note – Chris got into the FRS again quickly, as well as the adult residency list. Also, FRS serves throughout their life, not just 22. We are, however, still waiting on the I/O waiver. Just wanted to be accurate (12/29/2010).

2020 note!  Glad I posted the above 2010 note, as in the ten years passing I had forgotten exactly what happened with that!!  Chris DID get I/O Waiver, 2011.  then Ryan got one in 2018.  So thank God!  Also, a few posts ago I posted my new addition to Youtube, this video I made for my communication class in 2014 about Waivers.  Watch it – though it may be out of date, still crucial information.  AND, I’m thinner now… ha!  https://youtu.be/Ab947nZWlLE